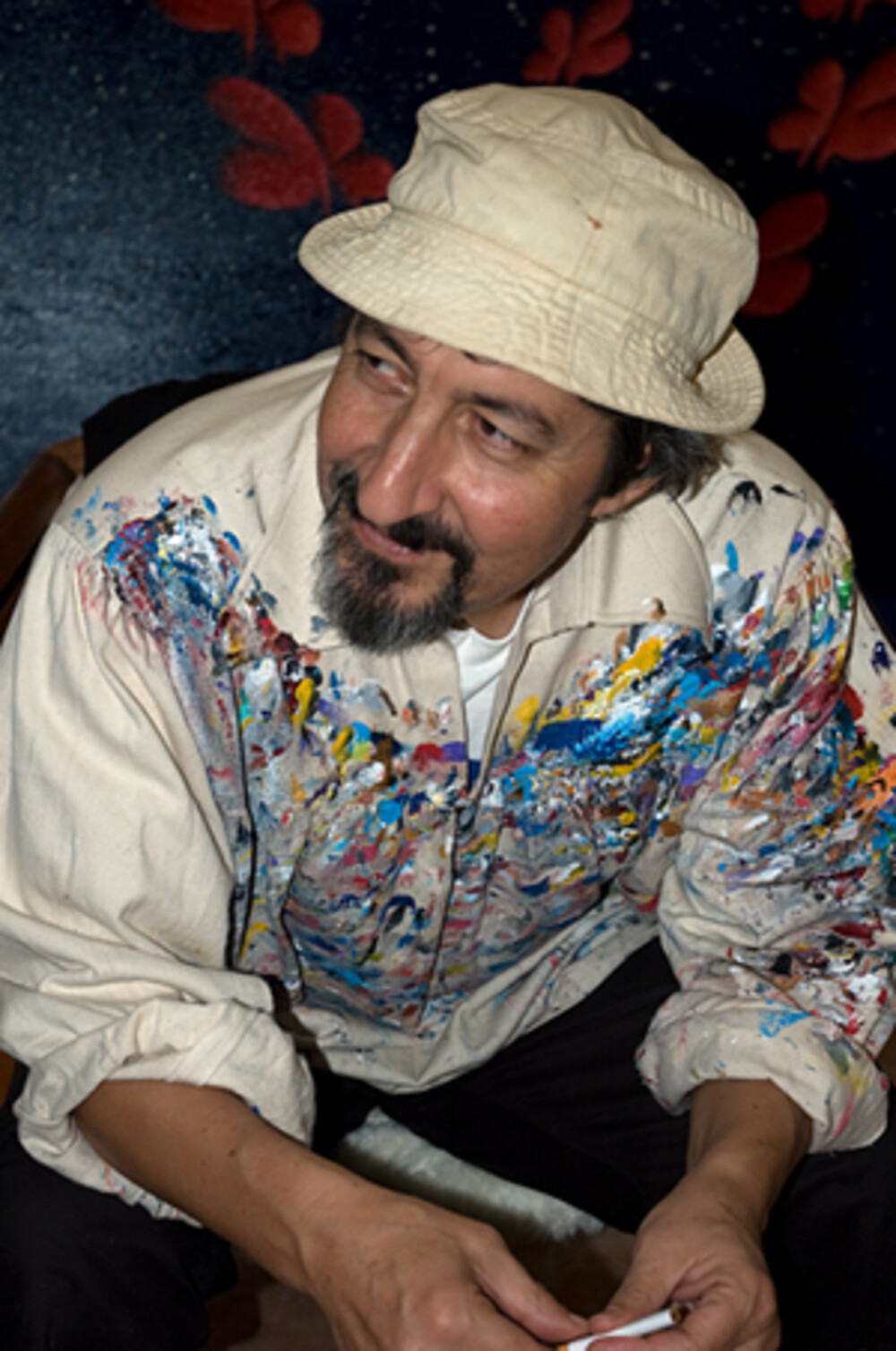 Coplu was born in the town of Ushak, Turkey and now creates his vibrant works of art in Vancouver, Canada and Antalya in Turkey. He is represented and his artistic creations are shown around the world by leading contemporary galleries.

Coplu’s journey as an artist began at a very early age when he was a child. His family was involved in the carpet business, so they spent their days making dyes, colouring yarns, drawing figures and matching patterns. His mother carried him in her backpack while weaving and she would explain to him what the various patterns meant and the effects of different colours in carpets.
His family moved to Istanbul when he was six and he lived there for thirty years. The sixties and seventies were periods of optimism, socialism and humanism in Turkey, but the 80’s brought very difficult political and social events. In response to censorship and the oppression of freedom of expression, he began to draw cartoons. His passion for drawing grew as he was studying to become a mining engineer at Istanbul University, but he found he could not keep his mind on his studies while it was completely occupied with social issues.
He witnessed great turmoil in his day to day life which he documented in his art and it was not long before his art became more important to him than his studies.
In 1984 he participated in his first art exhibition in Istanbul, which was followed by many solo exhibitions in Turkey and group exhibitions in Italy, Japan, France, Germany, Belgium, Russia, Spain, the USA and Canada. His illustrations have been published in numerous magazines, newspapers, books and catalogues both in Turkey and across Europe. Since his first international recognition in 1989 with the Nasreddin Hodja International Cartoon Competition Special Talent Award, he has received 25 awards in national and international competitions, including Second Prize in the International Okhotsk Cartoon Competition in Japan.
He has contributed cartoons to the Turkish Daily News for over five years and established an Open Air Cartoon Exhibition Space and the Cartoon School of Antalya. Under the auspices of these institutions he has taught many pupils the art of seeing the humorous side of life.
Throughout as a self-taught artist, he has been exploring different forms of visual art and developed his own distinctive style of painting. Lovingly an array of textures and layers of acrylic colour are harmoniously combined using brushes, palette knives and sponges, bringing to life what he feels within in his heart. The subjects of Coplu’s paintings are always directly linked to human relationships and the different environments they are connected to, mirroring the feelings, beliefs, thoughts, fears and experiences that we all encounter during our journey through life.
As Coplu would say with a contented smile on his face, “Life is Beautiful”, which radiates through his whimsical yet thought provoking and often optimistic compositions that add a splash of positive colour to life, transcending cultural diversities and connecting with the audience.
Coplu has been frequently interviewed by the media, with Channel News Asia documenting and screening his work to 22 countries around Asia in 2011.
His unique works of art are well-loved and widely collected by admirers and discerning institutions.

Colours of Love – by internationally renowned Turkish artist Coplu, draws upon love and romance with images of vibrant rainbow hearts upon his paintings, expressing the artist’s hopes and dreams for humankind and a bright future.

The use of reoccurring symbolism in Coplu’s work, reflects artistic and cultural choices that have been made by the artist in a process of selection over the passage of time. Clouds represent dreams, hearts stand for love and balloons freedom. These symbols combined together with his distinctive style have become so recognizable across the globe that they are like his signature painted across the canvas. Colours of Love features a rainbow heart in each of the paintings, shining in the night-time setting of his paintings, calmly floating on the sea, the land and in the sky. Coplu believes nature is a form of art that has the ability to take away negativity and give back love in return.
Just like the beautiful rainbow that appears after the gloomy rain, giving hope, human hearts can be soothed with love after encountering sorrow and adversity in life. Coplu’s paintings represent the hopes and dreams that we all have inside, encouraging, even inspiring us to find our inner peace, to embrace the capacity to love and be loved.
12
Sending...